Silvermines Hydro of significant importance to Ireland and Europe 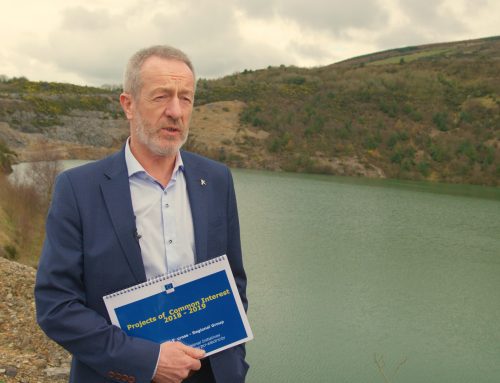 Silvermines Hydro of significant importance to Ireland and Europe

Tuesday, March 26, 2019: MEP Sean Kelly has lauded the planned hydro-electricity power station at Silvermines as being of critical European importance.

The Ireland South MEP, who sits on the Industry, Research and Energy (ITRE) Committee in the European Parliament, said that the project is right for Ireland at so many levels and will be favourably viewed at European level. His comments come as a new website www.silvermineshydro.ie was launched for the Silvermines Hydro Electric Power Station.

The renewable energy project is one of the largest private infrastructure projects in the history of the state and the only grid-scale energy storage project planned for Ireland.

It has been referenced in the European Network of Transmission Systems Operators for Electricity (ENTSOE) Plan, 2018-2028, which is seeking to develop a new, de-carbonised European electricity grid infrastructure in EU member states.

The plan will be backed by €6bn in EU funding, with only designated ‘Projects of Common Interest’ allowed to apply for that funding. And after visiting the site, MEP Sean Kelly said that the Silvermines Hydro project ticks all the boxes.

Speaking from the site, he said: “I’m blown away by the project. I know from working in Europe that Ireland is in big trouble in trying to meet its targets in 2020 in climate change. We need projects that are clean, good for the environment and good for the local community. And this ticks all the boxes. It will generate electricity in a clean way and I think everybody should be extremely enthusiastic about it and get behind it as quickly as possible.

“Europe is currently spending anything up to €100 billion over a-seven-year period on the Multi-Annual Financial Framework doing research into at all sorts of new projects that will generate clean energy to help us de-carbonise the economy and the environment.

“And therefore, any project that can fill those criteria, they’ll be very enthusiastic about. I’d be very surprised if this isn’t fully endorsed, especially giving it a Project of Common Interest status, which means that it’s not just of interest to Tipperary and Ireland but to Europe generally because what can happen here then can be replicated elsewhere.”

The lower reservoir already exists at the site by way of an open-cast mine flooded to a depth of some 70m at the foot of the Silvermines Mountains. A cost-benefit analysis conducted by ENTSOE for the process demonstrated significant societal benefits to Ireland from the project.

Siga Hydro, the company behind Silvermines, is an infrastructure development company established in 2010 by Darren Quinn, CEO. It is focused on strategic asset development in the clean energy sector, specifically developing enabling technologies such as grid-scale energy storage. The company and its partners have extensive, proven experience of permitting, designing, constructing and operating safe and innovative energy technologies and infrastructure investments.

MEP Kelly praised the SIGA Hydro team for its vision and turning the environmentally problematic Silvermines site into an environmental solution for the future. “Darren has vision and he’s put that into practice and turned a problem into a solution. I think the whole community must be delighted because I didn’t know to the extent of the pollution that was here as a result of the mines which are going back over 700 years,” he said.

Said Mr Quinn: “We’re very happy to have the support Sean Kelly. Sean, representing the constituency of Tipperary and Munster, can deliver our message in Europe and champion this project as one of the 19 storage projects in Europe. It is very significant for us.

“The opportunity to reuse the abandoned mine to accommodate the planned Investment motivates us. We believe Silvermines Hydro is one of the key pieces of infrastructure to allow Ireland shift to the use of renewable sources of electricity.”